Over forty years ago, Barbara Barstow started me on violin (and later converted me to viola!) in her home teaching studio in Belle Mead, New Jersey. Barbara was also the conductor of many of the orchestras at the New Jersey Youth Symphony--- I played in OSTE (Orchestral Strings Training Ensemble) the first year of its existence (which Wikipedia tells me was 1983) and later in the preparatory orchestra where Barbara programmed and conducted one of my compositions.

It was through playing in these youth ensembles that I became interested in writing my own music. Barbara's enthusiasm for music was infectious, and I've never met anyone who had as much energy as she did. Later on I ended up teaching theory and coaching ensembles for the youth symphony. When my mother died, Barbara conducted a piece for string orchestra that I had written for the memorial concert.

Barbara eventually became the artistic director of the entire New Jersey Youth Symphony Inc. before retiring with her husband Bill to Florida. She had also taught and led an orchestra at the Westminster Choir College. About twenty years ago, the New York Times put together a nice article on her, which I think really captured her spirit. Rather than attempt a paraphrase of it here, I'd encourage you to read it:

Most teachers have contributed something positive to my life along the way, but Barbara got me started doing all the things I still continue to work at today: playing the viola and violin and writing music. My story is far from unique--- I'd guess virtually any musician my age or younger from Central or Northern New Jersey would say something similar.

Barbara died yesterday in Florida. She and Bill were married for fifty years. She will be greatly missed by many. I just finished an arrangement of my Four Seasons for viola and orchestra, which will be dedicated to her memory. Presenting the viola in a leading role combined with composing for orchestra seems like just the right tribute---- She got me started on all of that. 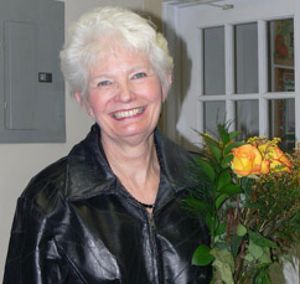