Originally posted on 2/7/20 as 'Artist-in-Residence' for the American Viola Society:

Although the viola is the greatest instrument of all time (it says so in the Book of Cremonus), I'm actually not a Viola Separatist. (Sorry.) That is to say, while I think the viola is great and unique, I'm not trying to exaggerate its difference from the violin or to give up all transcriptions and only play "pure" viola music.

I think some of the disagreements between purists and non-, boil down to more arguments of semantics than anything else. Recently I've seen in several places online where people argue about how different the basic techniques are between playing the viola and playing the violin. For me, 'basic technique' truly is basic and not getting bogged down with the differences in smaller details/nuances (of which there are many.) As the *basic* technique of the two instruments is more or less the same, the reality is that people switch back and forth between violin and viola all the time, at different stages of life. It would seem to me most beneficial to keep the technical materials (Sevcik, Schradieck, Kreutzer, Rode, Gavinies, Paganini etc.) the same to allow these switches to happen most easily.

Viola Separatists don't generally have a problem with non-violin instruments; it's only the violin they're trying to distance themselves from. Many separatists maintain that the viola is to sound as much like a cello as possible, and transcriptions such as the Brahms *Clarinet* Sonatas, the Elgar *Cello* Concerto, the Schubert *Arpeggione* Sonata, and the Bach *Cello* Suites are all just fine as standard viola repertoire---- it's only music from the violin repertoire that is criticized as inauthentic. I find this especially odd, since the violin ("violino" meaning "little viola" in Italian) is the closest instrument to the viola, and from the perspective of a composer, I would think those would make for some of the better transcriptions out there, not the worst.

Some of this surely stems from being an embattled minority within a larger society. The general public can recognize a violin, but rarely a viola. And then there are viola jokes! Although I think most people who tell the jokes do so innocently, I've known some who haven't, and intent matters, at least in my book.

Were the viola to have given up the alto clef and taken a different route in history, I could well imagine that it could have been considered along with the violin in the same way that many transposing brass and woodwind instruments are grouped together; certainly the sound and personality of a bass clarinet is quite different from that of an E flat clarinet's, yet the technique is largely the same but with many different nuances. (Or so I've been told!) A similar comparison might be made between the standard B flat trumpet and the piccolo trumpet. Or oboe and English horn. (And don't forget, as late as Prokofieff, the English horn parts were still being written in alto clef. I had opera scores printed in 1905, in which the choruses were-- logically-- written in soprano, alto, tenor, and bass clefs. It's fairly recently that nearly everything has been simplified to just treble and bass clefs.)

As with arguments about what separates a language from a dialect, the borders aren't entirely clear and somewhat based on culture and semantics. Still, in the misguided aims of purism and separatism, I don't think it's worth either exaggerating (or minimizing) the differences between the viola and the violin to achieve some sort of complete liberation.

Sure, the violin is a too-shrill, squeaky version of the viola, but because of its size and generally lower price (when made by the same maker), it can be great for starting kids out on. Yes, the sound of the E string up close can be unpleasant, but that helps it project in concertos....and it can keep people at a distance so you won't catch the latest flu. Were it not for the existence of the violin in the public mind, what would we tell the boarding gate agents we're bringing on the plane to put in the overhead? There are endless legitimate uses for the violin and therefore no need to try to distance ourselves from it. You can even make tap handles out of their scrolls! (Accompanying photo of violin tap handles made by Penn State viola professor Tim Deighton.) 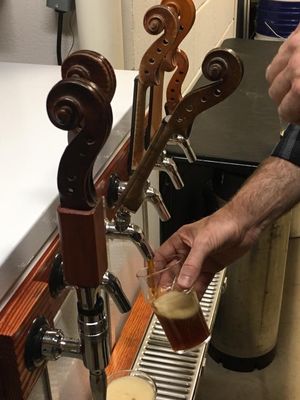